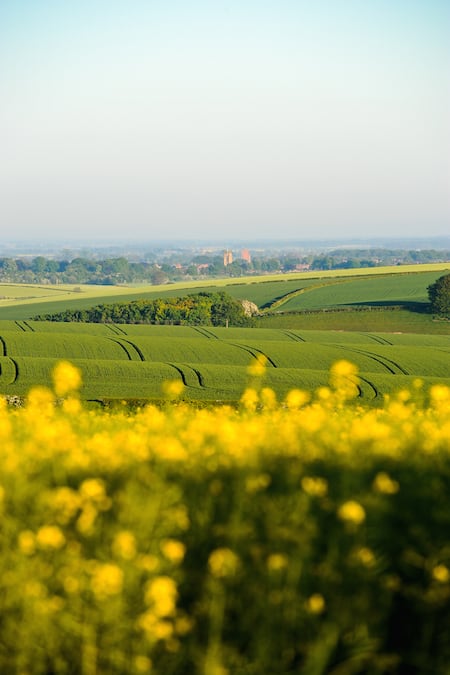 The name ‘wold’ is thought to have its origins in Old English, meaning “wooded upland”, but nowadays it usually refers to a piece of high open land or moor. This simple description doesn’t portray the quiet natural beauty of the Yorkshire Wolds – a hidden gem which has only recently received widespread attention through the work of internationally-acclaimed artist David Hockney, who lives in Bridlington.

The landscape of the Yorkshire Wolds is unusual in that it consists of high flat plateaus punctuated by deep dry grassy valleys and woodlands. The combination of excellent natural drainage – provided by the chalk hills – and the mild climate has meant that agriculture has dominated the area for generations.

The towns and villages of the Wolds are welcoming places, and are rich in history. Nafferton boasts a pretty mill pond fed by springs, Wansford lies on the Driffield canal and has a church built by Sir Tatton Sykes (of Sledmere) in 1868. Many of the villages are on the sites of ancient settlements and have archaeological significance, including Ruston Parva and Little Driffield. Kilham was a prosperous market town in the Medieval period, and Sledmere is the picturesque estate village of Sledmere House.

One of the quirkily-named Wolds villages – Wetwang – is said to have been the inspiration for J.R.R.Tolkien’s Middle Earth. Tolkien spent time in East Yorkshire during the first world war when he was stationed at an outpost of the Humber Garrison.

Driffield’s central location makes it an excellent base from which to explore the beautiful East Yorkshire countryside and the spectacular Yorkshire coast.

Nearby towns include Beverley, Bridlington, Malton, and Market Weighton, and the historic cities of York and Hull are only 29 and 22 miles away respectively. The local landscape is also dotted with pretty villages, panoramic views, and gentle rolling hills, making it very popular for walking, cycling, and photography.

On Driffield’s doorstep are the picturesque rolling hills of the Yorkshire Wolds, which have been the subject of many of artist David Hockney’s paintings. Also just a short drive away are some of the most distinctive landmarks of the Yorkshire coastline: the towering chalk cliffs at Bempton which are home to 250,000 seabirds, the historic harbour in Bridlington, the ancient lighthouses at Flamborough, and miles of golden sand.

Within easy reaching distance from Driffield are two stunning stately homes: Sledmere House and Burton Agnes Hall. Sledmere House – in the picturesque village of the same name – was built in 1790 by the Sykes family. Its 100ft long library, exquisite Turkish room, and gardens by Capability Brown attract visitors from all over the UK. The statuesque and treasure-filled Burton Agnes Hall has been described as “the perfect English house”, ranked along side the likes of Windsor Castle and Chatsworth.