Your Driffield.  Your Future 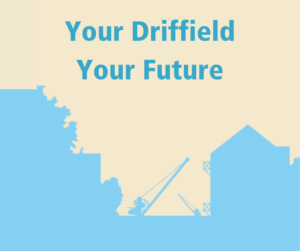 Driffield is a great place to live, work and visit but we want to make it even better.

Commonplace is an engagement website that has been launched for Driffield.  It’s a community space to share ideas and opinions to keep Driffield moving forward.  By working together with residents and local businesses we can support a vibrant and thriving town that better meets the needs of the community and attracts businesses, customers and visitors. 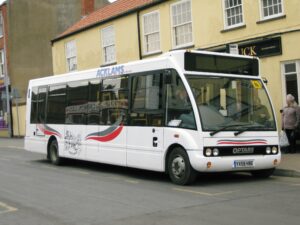 From Friday 6th January, the Town Bus service, now operated by North Holderness Community Transport (HART), will be providing a three-day service on a Tuesday, Thursday, and Friday.

Following the withdrawal of the previous operator, BusKing, a year ahead of the contract end, the service had to be reduced to two days per week.

A Commonplace engagement took place Monday 17th October – Tuesday 8th November to understand the impact of the service changes and to gain a measure of the future community transport needs of Driffield residents.

The engagement received a total of 302 participants, almost all of which were contributions from paper surveys handed out by members of the Driffield Town Council and East Riding of Yorkshire Council Local Growth team to residents using the service.

95% of those who responded stated that they were not happy with the reduction to the service with 73% stating that the service reduction from 5 days to 2 days would have an impact on them personally. Further to these, 78 respondents (26%) declared that they had no other means of transport accessible to them, other than the Town Bus.

The results found that users needed the service 2-3 days throughout the week, most journey times were in a morning with Thursday and Friday’s being the most used days of the week.

Shopping and attending both medical and personal appointments were the main purposes of the journeys made by the service users who responded.

The contributions, made by residents, supported the commitment of Driffield Town Council and the East Riding of Yorkshire Council to review budgets and source additional funds to allow an interim increase from two days to three days through till the contract end in August.

The extra day was arranged as a Friday due to the results of the engagement and the availability of HART.

Thank you to those that contributed to the survey

The Town Bus, subsidised in a partnership between East Riding of Yorkshire Council and Driffield Town Council has been an essential and much-loved part of Driffield life for over 25 years, serving the community of Driffield, Little Driffield and latterly Kelleythorpe. The service, whose route makes its way around the outer estates of Driffield has provided a valuable lifeline for those without transport or the physical ability to access the town centre amenities, not just for shopping but also to meet friends, attend clubs and access medical appointments. Originally the bus ran six days a week between the hours of 9am and 3pm; however, due to increased costs over a number of years the service was reduced to five days, not running on Saturdays. Accessed mostly by the elderly, it is extremely well used and has played a vital role in the everyday lives of many residents.

From 24th October, the service is being reduced to operating two days per week, Tuesdays and Thursdays, between the hours of 9am and 3pm.

The Local Growth team at East Riding of Yorkshire Council and Driffield Town Council would like to hear your views on the service changes and gain a measure of the future community transport needs of Driffield residents.

The engagement will be available on Commonplace from Monday 17th October

Face to face consultations will take place on the town bus service itself, daily across the timetable Monday 17th – Friday 21st October and on the Thursday Market, Thursday 27th October and Thursday 3rd November, from 11am-1pm.

Paper surveys will be available to complete from the Driffield Town Council offices on Market Walk, and the Driffield Wolds Weekly office, Middle Street South, Driffield.

The survey will close Sunday 6th November with results and further updates will be shared later in November.

Thank you to everybody that has contributed since Driffield Commonplace to date. The more people that are involved, the better the needs of the whole community will be reflected and so please have your say! 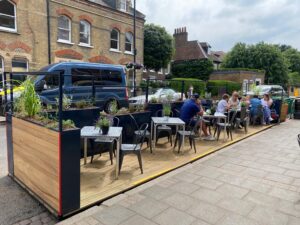 A parklet is a temporary attractive wooden platform and includes fixed seating and planting arrangements. The proposal is that during the summer months it would take one parking space, between Wilko and Lockwood Street, to provide the community with a much-desired dwell and amenity space.

The infographic provides a summary of the key findings from the community engagement on the proposed parklet installation for Middle Street South.

This engagement finished at midday on Monday 9th May 2022 after being open for almost two weeks, which included two in-person engagement opportunities on Market Place during Thursday Market Day. 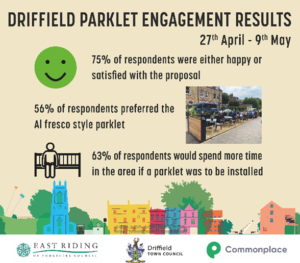 There were 417 responses from the public who feedback on the proposal.

East Riding of Yorkshire Council has now procured a suitable parklet that reflects the preferred ‘Al Fresco’ style with installation expected to be completed later in the summer.

Thank you to everybody that has engaged with Driffield Commonplace to date. Please sign up to be notified of project news: https://driffield.commonplace.is/

Climate Change has become a Climate Crisis. East Riding of Yorkshire Council is committed to taking action at a local level to reduce our carbon emissions and create a healthier, safer, and more sustainable future for all.

What changes would you like to see in your community to fight Climate Change?

Your ideas will help shape our Climate Change Strategy. Use an interactive map to suggest an idea to help tackle the climate crisis in your area.

Results: This infographic provides a summary of the key findings from the final round of engagement. Thank you to everybody that has engaged with Driffield Commonplace to date. The final round of engagement closed in February 2022 and related to the planned North End Park improvements has now opened. It included an image poll of play equipment options that we would like you to choose from.

This final round will help to decide what equipment will be installed in the park during its refurbishment in 2022.

The park was identified for improvements and funding has been secured by East Riding of Yorkshire Council to make some changes. We want you to have your say to ensure ERYC install suitable equipment for the users of the park.

Thank you to everybody that has contributed to Driffield Commonplace to date, the evidence that has been collected is being used to help inform improvements in the town. The more people that are involved, the better the needs of the whole community will be reflected and so please have your say!

Results: This infographic provides a summary of the key findings from the second phase of engagement. Thank you to everybody that has engaged with Driffield Commonplace to date. The recent round of engagement closed in January 2022 and received over 800 responses across the three surveys. The proposals delved deeper into three topics – North End Park, the Market Place Plaza, and the hospitality and entertainment offer. A summary for each of the proposals are outlined below:

The second phase of surveys were designed to understand what people think about specific aspects of living and working in Driffield and included specific questions about:

Results: This infographic provides a summary of the key findings from the first phase of engagement. Thank you to everybody that has engaged with Driffield Commonplace to date. 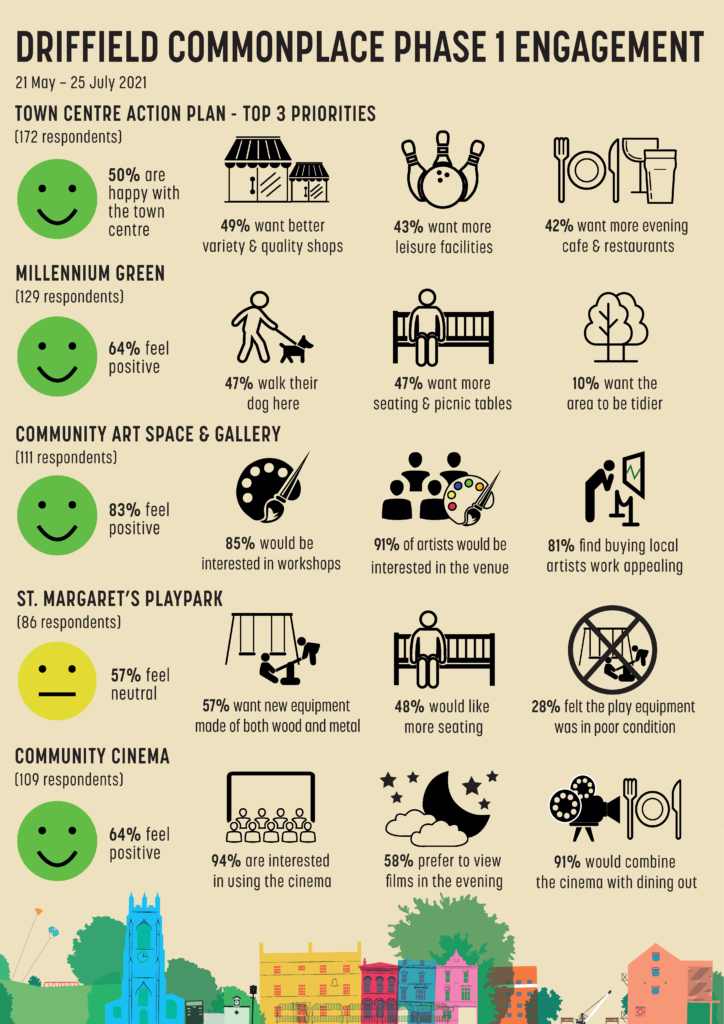 The first phase of engagement has now closed and the results will be shared soon. The deadline was extended again until 25 July as we continued to receive responses from the local community on current project proposals.

The Local Growth team at East Riding of Yorkshire Council are working with Driffield Town Council to analyse these results and use this information to shape the next stage of these projects. Survey results and updates on town centre activity will follow in August.

We are also developing a heatmap to capture your views on where and how you think improvements could be made to walking and cycling routes in Driffield town centre and the surrounding area. This is in response to the importance respondents have place on a better town centre environment, parks and public spaces that is more pedestrian friendly.

Thank you to everybody that has engaged with Driffield Commonplace so far. Since it was launched in May, the platform has received over 1,900 unique visitors with almost 800 contributions.